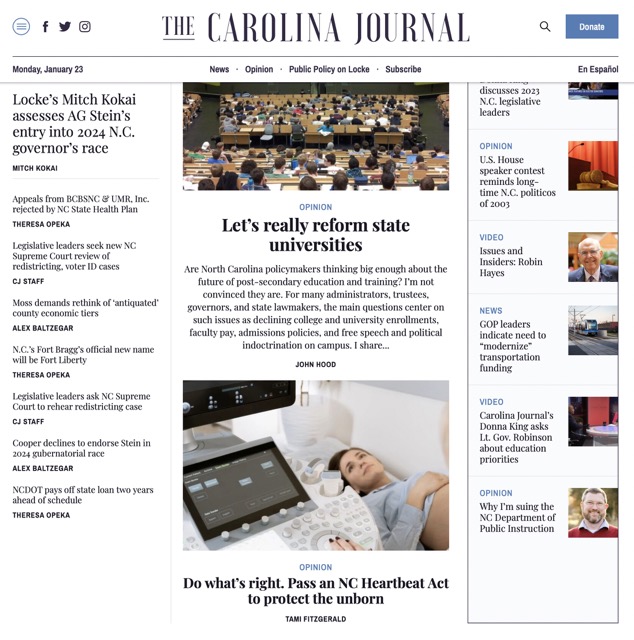 For the first time in 50 years, North Carolina legislators have the opportunity to save tens of thousands of pre-born babies annually from abortion violence, to protect women, and to provide life-saving alternatives to the brave mothers who choose life. With the Supreme Court’s overturning of Roe v. Wade, North Carolina could become a destination for life instead of abortion.

My mind was changed about abortion by “The Silent Scream,” a film which depicts, on ultrasound, the abortion of a 12-week-old baby. The horror of watching that unborn child open her mouth and scream silently — while being torn apart, dismembered, crushed, destroyed, and suctioned — changed my heart forever.

In the last 50 years, science and medical advances have shown us that life begins at conception. A study showing that 96% of 5,577 biologists from 1,058 academic institutions spread over 86 countries affirms that a human’s life begins at fertilization. Abortion is an ethical issue not a scientific one.

Any legislator who calls themselves “pro-life” should want to save as many unborn babies from abortion as possible.

Based on 2020 data from the Department of Health and Human Services, a 13-week bill will save only 13% of the unborn babies currently being aborted, while a heartbeat bill will save 86% of those babies. That’s a difference of 21,902 lives. And that doesn’t even consider that abortion has increased by 37% in North Carolina since Dobbs, making us the No. 1 destination for abortion in the nation. Passing a 13-week limitation on abortion will ensure we remain an abortion destination, because all the states around us have protected pre-born babies at conception or detection of a heartbeat.

A Heartbeat Act is already a major concession, but to choose 13-weeks over a Heartbeat bill is only symbolic. A heartbeat bill will save tens of thousands (25,803) of unborn babies from abortion every year; while a 13-week bill will only save 3,901 babies.

For decades, Republicans have campaigned on being pro-life. Being pro-life is easy when you can’t really do anything because of Roe v. Wade. But now saving all unborn lives from abortion is a real possibility. Choosing symbolic over substantial decreases in abortion is disingenuous.

The arguments against “going too far” abound. It will decrease our economic growth. Republicans may lose the majority, or even lose a small number of R+2 seats. Democrats may attack them in the next election. “The sky is falling.”

Forbes and CNBC rated North Carolina the top state for business in 2022, and we’ve been at the top for 10 years. While Republicans should be commended, worrying that protecting the precious lives of the pre-born is going to ruin our economy is both a false narrative and a moral cliff.

Opponents of a heartbeat bill argue that its passage will harm North Carolina economically. Yet, many of the states in the country which have either conception or heartbeat protection have the most successful economies — Texas, Tennessee, Georgia, Idaho. Protecting the unborn is consistent with North Carolina’s economic standing.

Rather than fear losing the majority, Republicans should fear not going far enough. A poll being released today by NC Values Coalition, Faith & Freedom Coalition, and SBA Pro-Life America shows that a plurality of voters — 45% to 31% — support a heartbeat law — as opposed to the extreme position of the Democrat party which supports abortion on demand up to the day of birth. When what is popular aligns with what is right and what will save the most lives, legislators should not hesitate.

Legislators who are struggling to enact the strongest protection for pre-born babies should remember the words of the late Martin Luther King, Jr.: “There comes a time when one must take a position that is neither safe, nor politic, nor popular, but he must take it because conscience tells him it is right.”